The person behind these pages 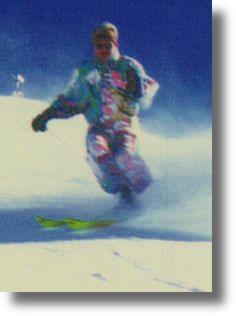 As you might have already guessed, I love skiing. Especially when I'm having holidays with several friends of mine. In one of those holidays I started to do snowboarding. Well, I will not give up skiing, but I will give that board another chance next time :-)

Yet, there are other things that I really like a lot. I read quite some science fiction books (some of the best for me so far: Snow Crash / Neil Stepherson, Neuromancer / Gibbson, Reality Dysfunction / Peter F. Hamliton) and fantasy (Lord of the Rings / Tolkien). Yes, I really love the film! 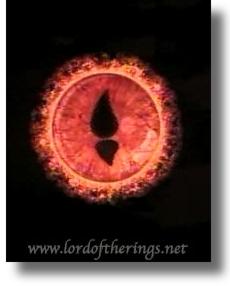 This already leads to another passion of mine: movies. I love it to go to the cinema, especially action, science fiction (note the stress on science!), fantasy (there are only very few good fantasy films) and thrillers. I also have a nice home theater setup at home, with a Sanyo PLV-Z3 HDTV projector, Marantz 7500 amplifier, and Teufel System 5 boxes. That makes my living room a THX certified home cinema :-P

As I am a science fiction freak, I have watched quite some series. However, quality has degraded after Babylon 5 is over, maybe Battlestar Galactica fills the gap a bit - though certainly not completely. The most awesome newcomer was Firefly, but as the show was cancled after only one half season... Most Star Trek episodes are not very good as well (still I would call me a Trekkie), only TNG and the later DS9 seasons are fine for me. Stargate Atlantis seems to be a nice distraction as well.

I don't hear a lot of radio, they are playing all the same tunes, which I cannot stand very long. For a long time now I really like electronica, electronic wave, cross-over, NDH (Neue Deutsche Härte) and independend rock groups most, such as Underworld, Chrystal Method, Blutengel, Prodigy, Nine Inch Nails, Rammstein, Oomph!, Garbagge, Alannah Myles, Guano Apes, In Extremo. I also like musicals and have seen quite a few of them: Cats (my favourite), Phantom of the Opera, Starlight Express, Jesus Christ Superstar, Aspects of Love (that one was not good), Les Misserables, Keep Cool, Freudiana, The Beauty and the Beast (Ugh!), Dance of the Vampires. The best show I have seen so far, however, is Sigfried and Roy in Las Vegas.

Not everything I like has to do with computers, or media in general. I love cooking, though I don't have enough time right now to do it a lot. I love it to chat (real chatting, though I finally got used to irc a bit), play games (with and without computers, but preferably with humans), drink good dry wines (especially French and Californian), and single malt whiskeys and whiskys (I have quite a collection of them 8).

Before I started working on my Phd, I studied computer science at the University of Erlangen. Erlangen is a beautiful little town, with Nürnberg nearby, and with lots and lots of pubs. Additionally, Erlangen and Nürnberg have the best cinemas I currently know (despite all the IMAX and OmniMAX cinemas around), the Cinestar in Erlangen and the Cinecitta in Nürberg. I missed all that in Stuttgart, but now I'm back in Nürberg for good!

I am still somewhat related to Erlangen. Because I once was a fond advocate of the Amiga computer system, I am still the maintainer of the Amiga Archive Erlangen, working on other branches of the ftp server as well. I visit Erlangen quite often, as a lot of friends live and prosper there.